Thank you for using our Mac software portal. Unfortunately, there is no direct download for the Mac version of 2Do. To download the application, proceed to the App Store via the link below. This app is available on Mac and iPhone. To unlock the iOS version, open Setapp on your Mac, then navigate to the app page in Setapp, click 'iOS app', and follow the instructions. Do more with Setapp. Your app will arrive with Setapp, a suite of apps for solving everyday tasks on Mac and iPhone. Explore for 7 days free, then $9.99/mo.

GTD®, XYZ and everything in between - it can handle it all. Seriously.
See and believe: YouTube.com/The2DoApp
2Do lets you take a completely different approach to managing your tasks. With its extremely simple-to-use interface and a comprehensive and flexible set of powerful features, it lets you focus on what's most important to you: your life. There is no wrong way of using 2Do, and unlike other to-do apps, it won't force you in adhering to a particular task management methodology.
AWARDS
• Apple - Best of 2013 Mac App Store
• Macstories - App of the Year 2015 iOS
• Cult of Mac - Best Task Manager for iOS
SIMPLE TASKS, CHECKLISTS & PROJECTS
• Create simple tasks, or checklists and projects with sub-tasks. Tasks can have notes, attachments and multiple alarms.
• Set any task to repeat using a flexible set of options.
LIST GROUPS, LISTS & SMART LISTS
• In addition to built-in Focus lists that allow you to conveniently view upcoming, starred or scheduled tasks, you can create multiple lists to manage and organize your tasks.
• Smart lists let you harness the true potential of 2Do using a number of search options, filters and search pre-sets. Using Smart Lists, you can create custom views of your tasks and use them to focus-in or find frequently managed tasks.
• Furthermore, related Smart lists and Lists can be grouped together using a List Group in the order you desire.
PROJECT VIEW
• Quickly focus on your projects and their sub-tasks and nothing else
• Access project view directly from the list view or using keyboard shortcuts
• Focus filters and sort options can be applied separately to individual projects using Project View
TAGS
• Manage tags within Tag Groups.
• Easily assign tags to tasks and vice versa.
• Leverage the easy to use yet powerful integration of Tags & Smart Lists to filter on frequently managed tasks.
• Find Used vs. Unused tags with a click.
LOCATIONS
• Easily create, edit and assign locations to tasks
• Create powerful Smart Lists based on Locations
SYNC
• Stay in sync with multiple Macs and mobile devices running 2Do using your favorite sync method over fast and reliable Push Sync: Dropbox, Reminders (CalDAV), 3rd Party CalDAV Servers (iCal, Fruux, ownCloud etc) or Toodledo.
• Using Dropbox, you can keep multiple devices in sync seamlessly. Devices can be added / removed at any time.
• Using Reminders CalDAV sync you can keep 2Do and Reminders in sync as well as create tasks using Siri.
• Unobtrusive automatic background sync supported for Dropbox, Reminders (CalDAV) and CalDAV.
QUICK ENTRY
• Save your thoughts as they come to you. Using a global hotkey, Quick Entry allows you to add tasks from any app or any Space.
• 2Do does it right. Quick Entry works even if 2Do was not launched or is not running in the background.
QUICK LOOK
• Works just the way Quick Look does in Finder or other built-in OS X apps. Use the spacebar to zoom in and out of a task to preview notes, multi-line titles or other details attached to your tasks.
ALARMS & NOTIFICATIONS
• Stay on top of your tasks with alarms and notifications. Supports Notification Center as well as a built-in notification system which works even when 2Do is *not running*.
• Set up automatic alarms for your tasks.
PASSWORD PROTECTION
• Your life is a private affair. Manage it by locking out individual lists or the whole app with a single click.
AUTOMATIC BACKUPS
• 2Do values your tasks. Periodic automatic backups are created for you which can be transferred from one machine to another or from the iOS version of 2Do to the Mac and vice versa.
• Save & restore of external backups
FLUID
• Adding and editing tasks is blazing fast using in-place editors and popovers
• 2Do supports both mouse users, by offering them numerous shortcuts, as well as keyboard power-users by supporting dozens of keyboard shortcuts
• 2Do won't slow down over time

* Improved connectivity with Custom CalDAV servers
* Reverted a recent behavioral change to repeating tasks with both start / due dates when 'Repeat on completion' was set. Only the due date is now primarily selected for the next occurrence.
* Ongoing stability and performance improvements

After spending many, many years using a different, well known, application for my [intensive] task management, I finally got fed up with some of its problems and limitations and, before following its upgrade path, decided to take the plunge and give 2Do a try. Gosh, I sure wish I’d started using 2Do years ago.
It’s always extremely difficult (and the cause for great apprehension) whenever considering a move from something that you’ve been using for YEARS and, in this case, that happens to control your daily life. You never realize how much you do completely automatically without even looking (especially if you’re a keyboard user and not a mouse user) until you’re trying to use something else. Much to my surprise and delight, making this change was a relative breeze. I’ve found 2Do to be more powerful, have more useful features, be better looking and has the ability to be substantially more customized by the user than the previous app I’d been using. During the trial period I experienced what seemed to be a glitch and I contacted the developer. I found the support to be absolultely GREAT. “Jerry' replied immediately (and was even actually willing to speak on the telephone from another country in order to get to the root of the problem).
I’m thrilled to now be using 2Do as my main task management application and even more pleased with the amazing support I've received during the first few weeks of using it.

Best fully-functional to-do app out there… but... 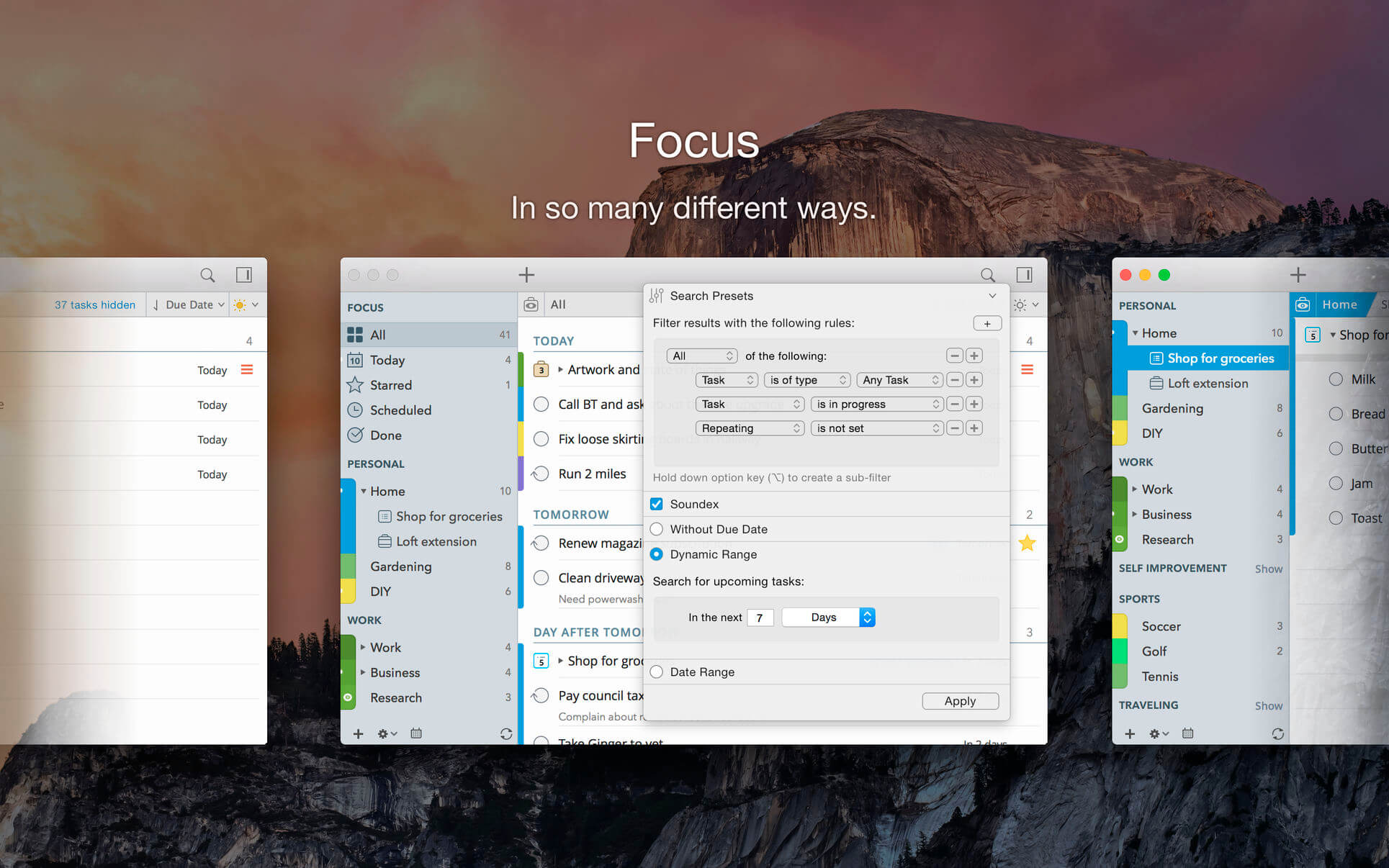 I have relied on this app for a long, long time. Every time I try another app, I come crawling back to this one. It’s got every function for tasks, and it makes you wonder why other task managers are so weak on the features. Some don’t even have due dates! Most others will charge you money for a search feature, start dates, recurring features, etc. Most lately will insist on a subscription in order to unlock what ought to be the most basic of features. I really appreciate the pay-once-and-use-it model. I also like that it synchronizes between my devices, and in using iCloud sync, I can use Siri to add tasks into 2do (although the built-in reminders app is utterly useless). My major complaint is that I can’t get these tasks anywhere on a windows machine. I use mac at home, but windows at work, and I feel forced to find another, lesser app, in order to get stuff done at work, and that’s where I most need this app! I wish there were a solution, whether a windows app, a web-browser version with the familiar interface, or something! It wouldn’t have to store my data, which I’d happily continue to store in iCloud. It would just need to read the data, and present it in a browser. I won’t mark-down the rating because this app truly deserves all 5 stars, but this one shortcoming is quite substantial and might drive an enthusiastic user into the clutches of another app instead.

I’ve trid most of them… this is the best

I’ve tried so many of these to do lists… and this is the one I just keep coming back to. I do use this on IOS, mac, and my iPad. Its a minor investment compared to what you get out of this if you use it well. A few key points:
1) You can use siri (witought doing the annoying siri kit thing (such as “In things, remind me …). If you use Caldav you can just add reminders using the reminders app and have caldav sync them ot 2 do) I do that and just shut off hte notifaons for the reminders app… Magic)
2) Email to do - Just BCC an email that you want ot folloiw up with your 2do email address (I created a gmail address that just is used for 2do imports). Its a small in app purchase and well worth it.
The Dev keeps adding features and refinments. If you want to be a power user you can do that… if you just want an amazing simpel 2do applicaion it does that. Can not recommend this more. I was intrigured by a few features in Things, and tried it (on all of my devices). Ultmatily I came back to 2Do for a few reasons. The ease of adding tasks uisng Siri (on my iphone, in the car, or on my Mac) just made this a no brainer. On the mac there are also some great keyboard shortcuts for things like deferring a task a day that once you get used to them can be incredbitly powerful.

The developer, Beehive Innovations Services, indicated that the app’s privacy practices may include handling of data as described below. For more information, see the developer’s privacy policy. 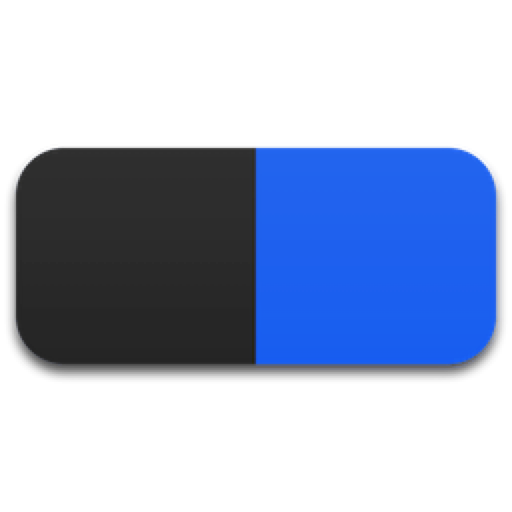 Data Not Linked to You

The following data may be collected but it is not linked to your identity:

Privacy practices may vary, for example, based on the features you use or your age. Learn More 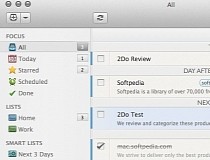